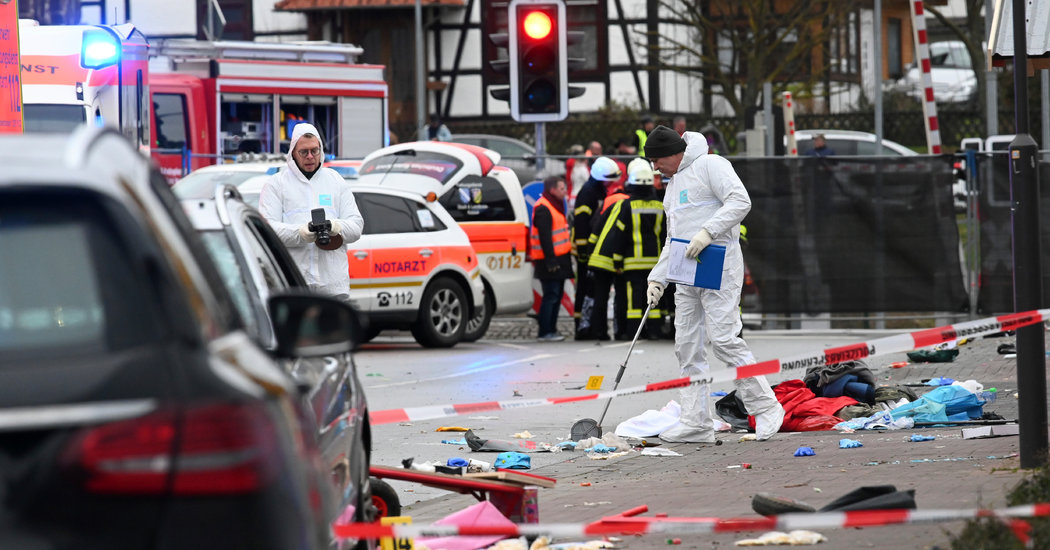 BERLIN — A man drove his car into a carnival parade in a German town on Monday, according to the police, wounding more than a dozen people, including children, and shaking a country already on edge in the wake of a racist shooting that left several dead last week.

The police gave conflicting reports as to whether the crash was intentional. While one spokesman told reporters at the scene that the crash had been deliberate, a spokeswoman for North Hesse regional police later said that the motive was not yet clear.

Even with much under investigation, the authorities canceled all other carnival parades across the central state of Hesse, where the incident took place.

The crash happened around 2:30 p.m. in the small town of Volkmarsen. It came days after a racist extremist killed nine people on Wednesday in the city of Hanau, 135 miles to the south. In that attack, the gunman was later found dead, alongside his mother.

Residents of Volkmarsen, a town of about 7,000, had gathered to celebrate Shrove Monday, when thousands of Germans dress up and throng the streets for carnival parades, which are particularly popular in Roman Catholic regions in the country’s west and south.

Images from the area of the crash showed a scene of destruction. A silver Mercedes station wagon, believed to be the car that had crashed into the crowd, could be seen on the street outside a supermarket, surrounded by police officers and carnivalgoers dressed up as clowns and animals.

Beside the vehicle were scattered the wheels of a child’s wagon, its wooden sides splintered.

Witnesses told Waldeckische Landeszeitung, a regional newspaper, that the driver had evaded a barrier to ram the crowd.

The crash came just days after Horst Seehofer, the German interior minister, had ordered an increased police presence across the country, especially around larger events such as carnival celebrations.