Alberta, Canada – Protests, blockades and other actions by Indigenous people and their allies in Canada have brought the country to a “tipping point”.

That is according to Chief Wilton Littlechild, the former head of the Truth and Reconciliation Commission (TRC) of Canada.

“This is a tipping point for Canada and it illustrates a real need for reconciliation to begin where it hasn’t and to continue where it has,” Littlechild told Al Jazeera via phone.

For weeks, protesters have taken to the streets, railways and ports, paralysing parts of the country’s transportation sector, to stand in solidarity with Wet’suwet’en land defenders, who are fighting to stop the construction of a pipeline on their traditional territories in northern British Columbia. Wet’suwet’en hereditary chiefs, who hold authority over their land, say they were not properly consulted on the 670km (416-mile) Coastal GasLink pipeline. The company says it reached agreements with 20 elected First Nations band councils.

Following the arrests of Wet’suwet’en land defenders about two weeks ago, tensions have mounted as solidarity actions have grown across the country, with many calling on Prime Minister Justin Trudeau to solve the crisis.

On the other side, provincial government leaders have condemned Trudeau for failing to endorse forceful action on the protesters, pointing to the blockade’s economic effects.

“Enough is enough,” he added at a news conference on Wednesday in Edmonton. 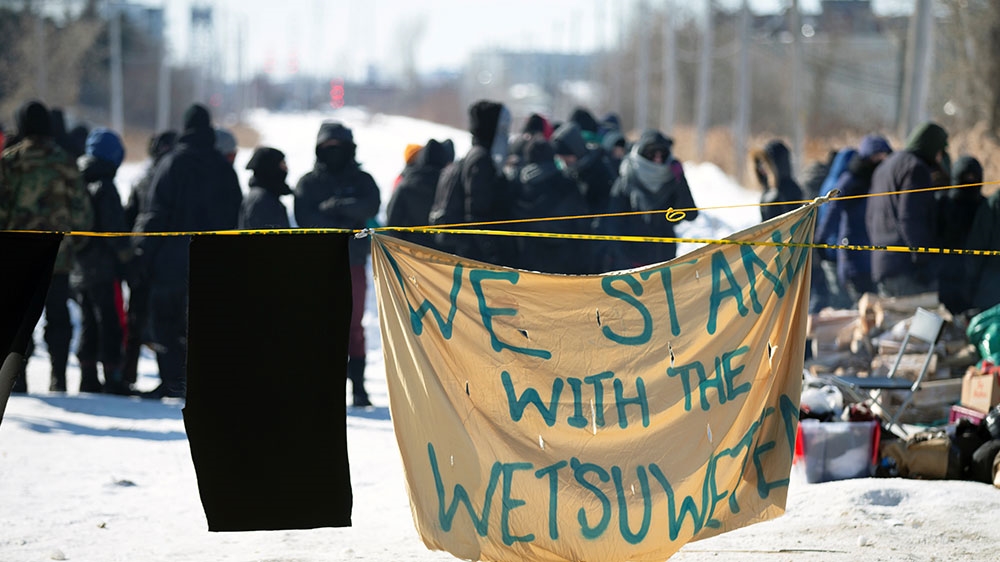 Canadian National Railway (CN) and Via Rail Canada announced temporary layoffs of close to 1,500 people this week as a result of the demonstrations. According to Dennis Darby, CEO of Canadian Manufacturers & Exporters, the blockades are holding up approximately $321m ($425 million Canadian) worth of goods every day.

Meanwhile, Quebec Premier Francois Legault warned Trudeau to issue an ultimatum to protesters to remove their blockades and allow for medical supplies, propane and other necessities delivered by rail back to the region. If not, Legault said he’s prepared to take the matter into his own hands by enlisting the help of provincial police.

“We are losing control,” Legault told a group of news reporters at the Quebec legislative building earlier this week. “I don’t want to be back in the middle of a propane crisis with the farmers. I don’t want to find myself to not have planes taking off because we no longer have fuel. These barricades must be dismantled in the coming days. Nothing can be excluded right now … yes, we have to respect Indigenous people, listen to them, but we also need to listen to Canadians, to Quebecers.” 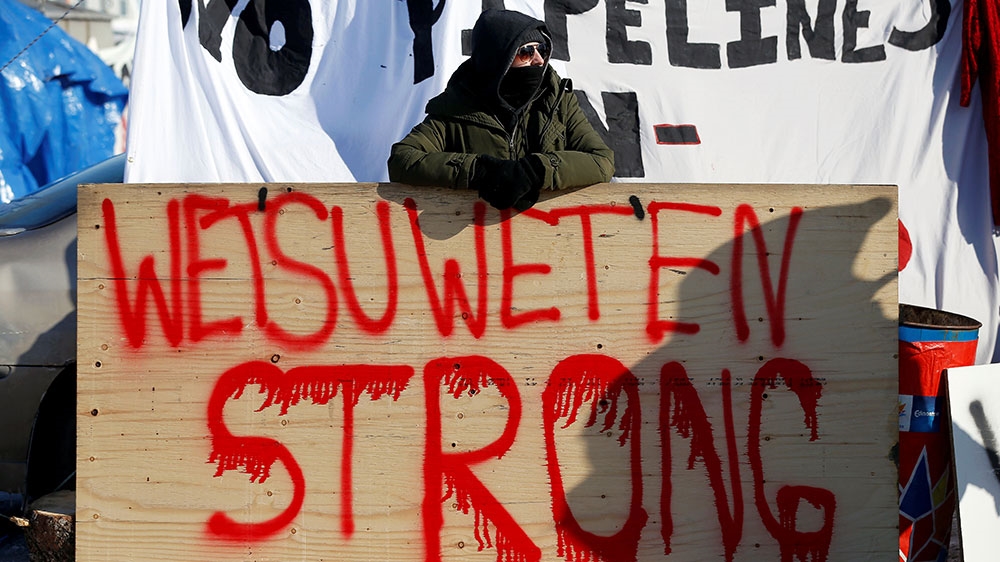 A supporter of the Indigenous Wet’suwet’en Nation’s hereditary chiefs camps at a railway blockade as part of protests against British Columbia’s Coastal GasLink pipeline, in Edmonton, Alberta [Codie McLachlan/Reuters]

“We need to resolve it not just for today and tomorrow, but for the weeks and months to come. The approach the leader of the opposition [Scheer] is proposing would not ensure jobs and stability for Canadians in the future. We’re focused on resolving it peacefully,” Trudeau said from Parliament Hill Wednesday.

He added, however, that the blockades are unacceptable.

Since taking office in 2015, Trudeau has said his government’s number one priority is reconciliation with First Nations.

But the latest tensions underscore that the road to reconciliation has been rocky.

Things can go one of many ways, Littlechild told Al Jazeera.

“If it continues in a negative way it will hurt all the good efforts of reconciliation,” Littlechild said. “This is a new era and we can look to the United Nations, the Treaties, the TRC Calls to Action. There’s solutions proposed in those documents that are helpful.” 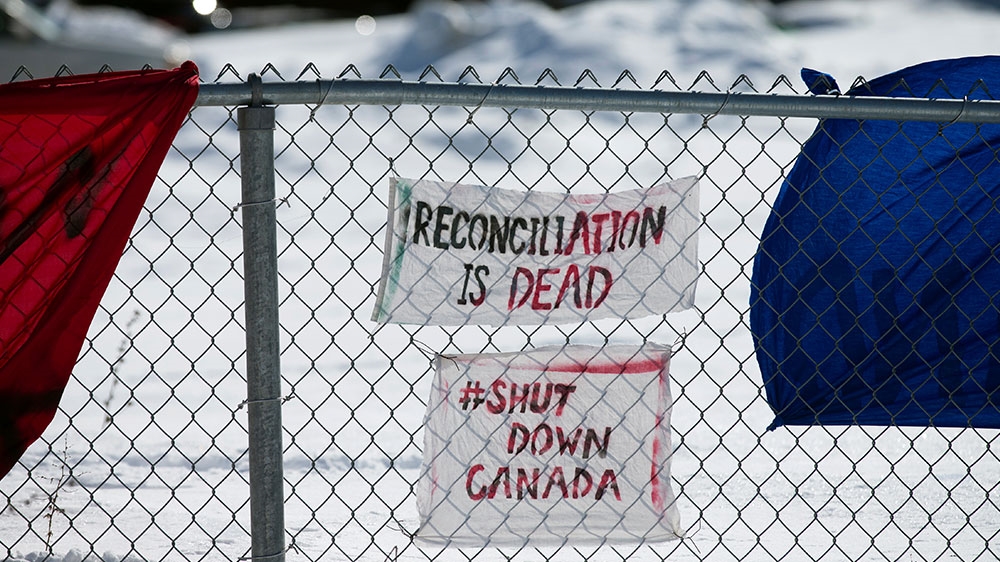 Signs are posted on a fence as supporters of the Indigenous Wet’suwet’en Nation’s hereditary chiefs maintain a railway blockade as part of protests against British Columbia’s Coastal GasLink pipeline, in St Lambert, Quebec [Christinne Muschi/Reuters]

Sylvia McAdam, a Cree lawyer and professor at the University of Windsor, agreed.

“This is not a new resistance,” said McAdam, one of the founders of Idle No More, a movement born in 2012 in response to parliamentary bills that threatened Indigenous sovereignty and environmental protections.

McAdam said Canada needs to reckon with its past and pay the debts it owes First Nations.

“I hope that the colonial state called Canada will make fundamental changes in how they work with Indigenous Peoples,” she said. “That means we get our lands back, honour the treaties, none of the lands are ceded or surrendered. If that doesn’t happen you’re [Canada] going to condemn the next generation [my grandchildren] to poverty and you’re going to leave behind a very angry generation of young people.” 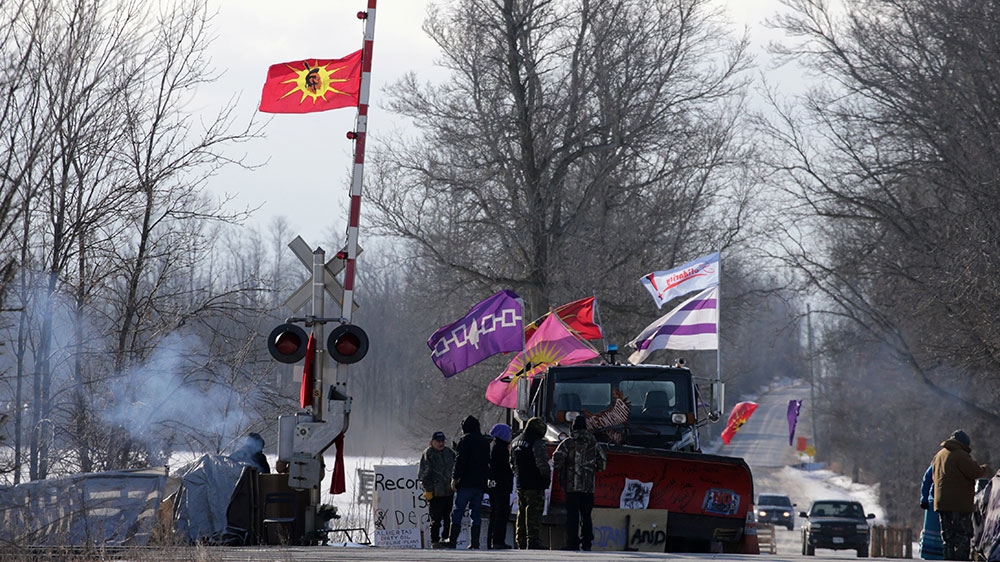 First Nations members of the Tyendinaga Mohawk Territory maintain a camp next to a railway crossing, in support of Wet’suwet’en Nation members who are trying to stop construction of British Columbia’s Coastal GasLink pipeline [Chris Helgren/Reuters]

For now, however, it is unclear if the situation will de-escalate.

Federal police from the Royal Canadian Mounted Police (RCMP) sent a letter to hereditary chiefs this week, saying they would withdraw from Wet’suwet’en territory along the pipeline’s route as long as a service road was kept clear. Hereditary chiefs, however, rejected the offer, saying the RCMP are still patrolling the territory. Some hereditary chiefs will travel to Tyendinaga Mohawk Territory on Friday and are expected to hold a news conference.

According to Littlechild, the situation will take “political will” on all sides to come to an agreement.

“This could be an opportunity to resolve these challenges together and learn to live peacefully together going forward.”