United States Representative Jackie Speier holding up a copy of the US Constitution during an event about the resolution to remove the deadline for ratification of the Equal Rights Amendment at the Capitol in Washington, DC [J. Scott Applewhite/AP Photo]

Washington, DC – The United States House of Representatives voted along party lines on Thursday to remove the deadline for state ratification of the Equal Rights Amendment (ERA), which would provide equal legal rights regardless of sex under the US Constitution.

The 232-183 vote, though only symbolic as the Senate is not expected to pass the measure, gives impetus to lawsuits that may go to the US Supreme Court and that may seek to force government recognition of the amendment and renew a political fight between Democrats and Republicans over not just equal rights for women, but also reproductive choices.

“With this resolution we take a giant step toward equality for women, progress for families and a stronger America,” House Speaker Nancy Pelosi said at a rally on Wednesday with leaders of advocacy groups that support the ERA.

The ERA was formally proposed by Congress in 1972. At the time, however, Congress set a deadline for ratification by the states. Amendments must win ratification from two-thirds of US states, or 38 out of 50, to take effect. Only 35 states had ratified the proposed amendment when the deadline expired.

But the situation changed when Democrats won control of the legislature in Virginia last year and the state became the 38th state to ratify the ERA in January.

‘A vote for equality’

Now, backers hope that by retroactively removing the deadline, Congress can recognise ratifications by Virginia and two other states, Illinois and Nevada.

“Because women are not recognised in our founding document, the Constitution, as fully equal to men, we are not equal,” said Representative Jackie Speier, a Democrat. 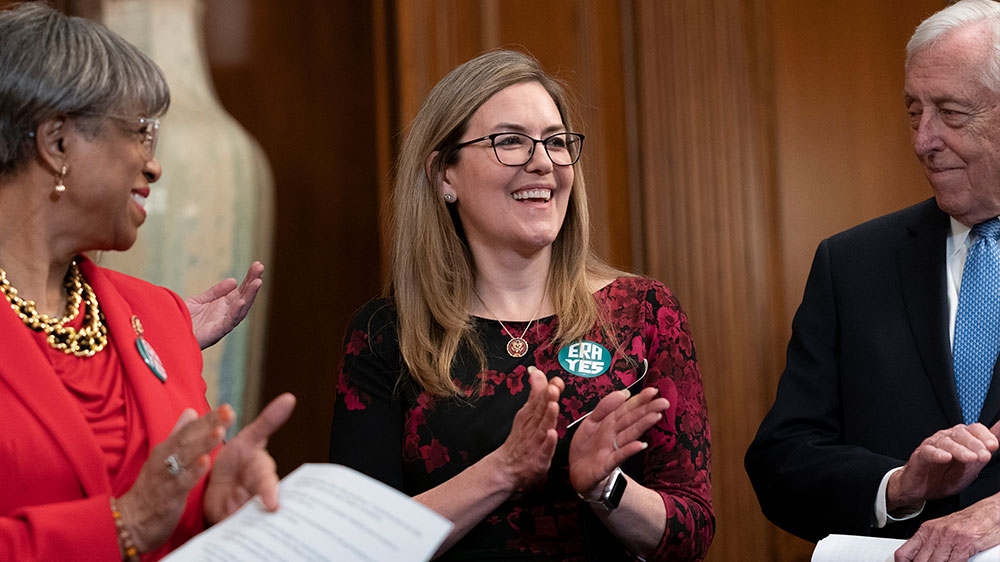 US Representative Jennifer Wexton, centre, applauds after a vote by the Virginia Senate and House of Delegates to ratify the Equal Rights Amendment, during an ERA event at the Capitol in Washington, DC [J Scott Applewhite/AP Photo] [Daylife]

The ERA is broadly supported by most Americans, polling suggests. The House vote serves a broader political agenda for House Democrats to motivate women voters going into the upcoming US elections.

But the bill will likely face pushback in the Senate.

Many Republicans oppose the ERA largely because they see it as an attempt to sweep away state-level restrictions on abortion.

“It is now well understood that the language used in the ERA would prevent state’s voters from enacting any limits on abortion, up to the moment of birth,” said US Representative Doug Collins, a Republican. 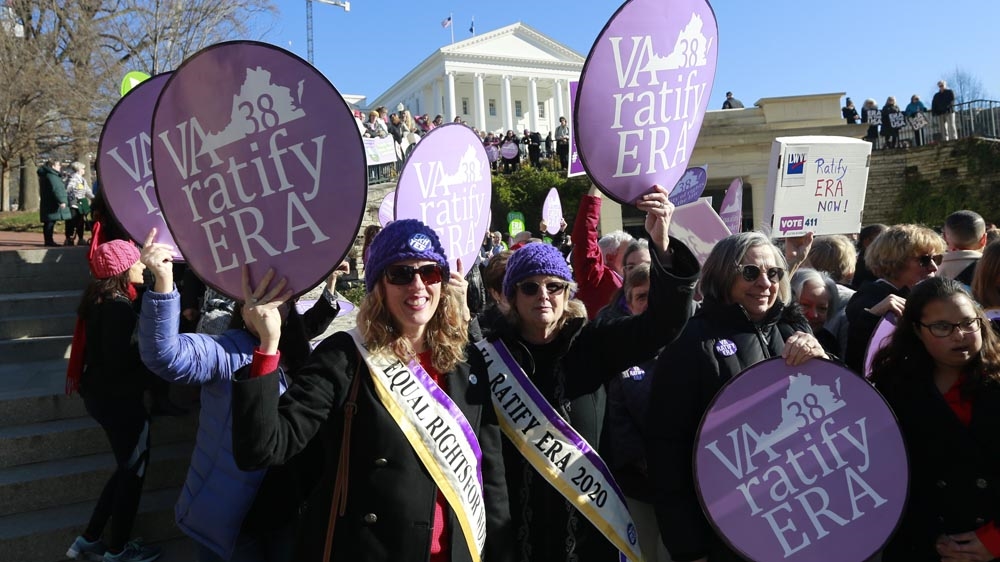 “Just in the last few years, an increasing number of pro-abortion advocates have openly argued that the language of the 1972 ERA would require unlimited abortions with no restrictions whatsoever, nationwide, regardless of the view of the voter,” Collins said.

The Trump administration’s Department of Justice issued a legal opinion in January arguing that the proposed ERA could not be certified because fewer than 38 states had met the 1982 deadline. Other critics highlight that five states have voted to revoke their ratifications.

To the extent Republicans voted against the ERA on Thursday, the issue may spell potential trouble for US President Donald Trump in his re-election bid. The president already faces a significant gap in support from women.

Women disapproved of Trump’s performance in office by a 58 percent to 41 percent margin in a Fox News poll conducted in December.

There are three lawsuits making their way through the courts regarding the ERA. At least one is expected to make its way to the Supreme Court.

The court has a conservative majority, but even liberal justices have signalled it may be time to restart the ERA debate altogether.

“I’d like to start it over,” she said at an event at Georgetown University Law, US media reported.
Ginsberg had already said she hopes the ERA “will be put back in the political hopper, starting over again, collecting the necessary number of states to ratify it”.