World leaders at a UN-backed summit in Germany hope to reach a more lasting ceasefire in the protracted Libyan conflict [File: Mahmud Turkia/AFP]

Leaders of Libya’s warring sides and foreign powers have begun talks in Berlin at an international summit on ways to end the long-running conflict in the oil-rich North African country.

The head of Tripoli’s internationally recognised government, Fayez al-Sarraj, and his rival, renegade military commander Khalifa Haftar, were expected to attend Sunday’s UN-backed gathering in the German capital, the first such event since 2018.

Haftar must end his aggressive stance to pave the way for a political process, Turkish President Recep Tayyip Erdogan said on Sunday at the peace summit.

“To implement the other stages of the political process and solution, Haftar’s aggressive stance must come to an end,” Erdogan said in comments broadcast on Turkish television at the start of a meeting with Russian President Vladimir Putin.

France’s President Emmanuel Macron on Sunday hit out against foreign troop deployments in war-ravaged Libya, saying such intervention only serves to fuel the conflict.

Voicing his “acute concerns over the arrival of Syrian and foreign fighters in the city of Tripoli”, Macron said “that must end”.

Leaders from the United Nations, the European Union, the African Union and the Arab League also attended.

Merkel previously said enforcing a UN arms embargo on Libya would be a priority at the summit attended by the leading parties in Libya’s war, as well as representatives from their foreign backers and other nations.

“It will be extremely difficult to see how Berlin can convince all the parties to stop providing weapons to the warring factions and stop interfering in Libya when they have different agendas,” Al Jazeera’s Hashem Ahelbarra, reporting from Berlin, said.

Haftar is backed by the UAE, Egypt, Jordan and, most recently, Russian mercenaries. France has also been accused of giving him some support.

Turkey strongly supports the Tripoli-based Government of National Accord (GNA), and its parliament approved a motion to send troops to Libya earlier this month. 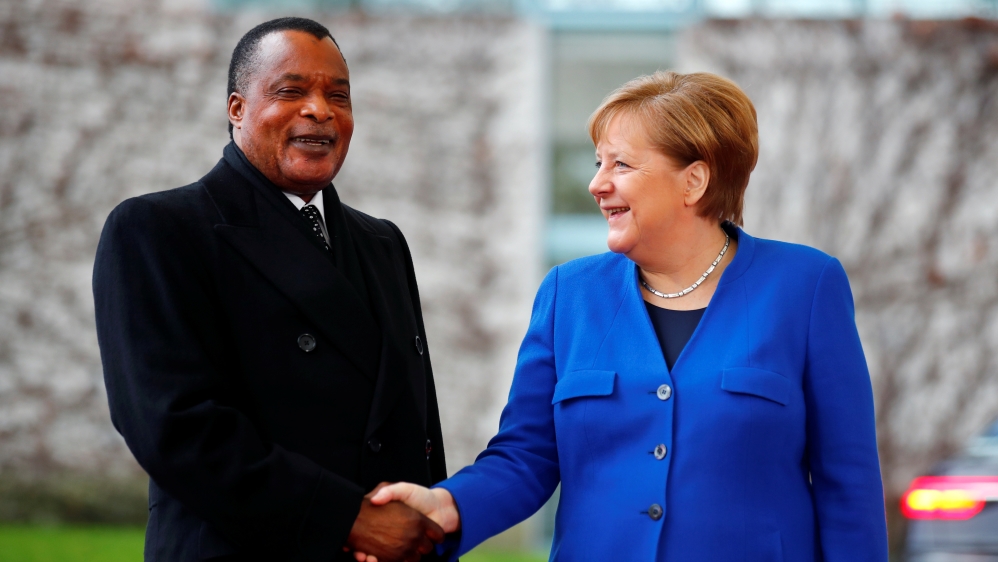 The conference is the latest attempt to restore stability and peace to Libya, which has been splintered between competing factions and militias since former leader Muammar Gaddafi was overthrown and killed during a NATO-supported uprising in 2011.

The deeply divided country currently has two rival administrations: The UN-recognised GNA and another allied with Haftar in the eastern city of Tobruk.

As with previous failed attempts at securing a lasting ceasefire, Haftar, who in April last year launched an offensive to take Tripoli, will be centre stage as international powers hope to put pressure on him to continue a ceasefire brokered by Russia and Turkey that has largely held for one week.

The warring sides earlier this month agreed to the ceasefire, though Haftar dramatically departed talks in Moscow on January 12 before signing the formalised agreement with al-Sarraj.

Al-Sarraj cast doubt on Haftar’s agenda hours before the start of the conference.

“Long experience makes us doubt the intentions, seriousness and commitment of the other side, whom everyone know seeks powers at any price,” al-Sarraj told the German press agency dpa.

He vowed to “defend” Tripoli should the Berlin conference end inconclusively and Haftar resume his military campaign for the city.

Turning off the tap

The move was a protest against Turkey’s decision to send troops to shore up the GNA.

Haftar wants the armed factions in western Libya to disband and has called for a maritime and military deal between the GNA and Turkey to be scrapped.

Underlining the stakes involved, German Foreign Minister Heiko Maas said “Europe and those players who are influential” in the region have all been called to Berlin, because “we have to make sure Libya doesn’t become a second Syria”.

“The conference can be the first step to peace for Libya,” Maas told Bild newspaper.

Speaking to reporters at an Istanbul airport before leaving to attend the talks, Erdogan on Sunday said he hoped for an “important step” to cement the fragile ceasefire “and a political solution”.

In a column published on Politico on the eve of the talks, Erdogan had urged Europe to stand united behind al-Sarraj’s government, as Tripoli’s fall could leave “fertile ground” for armed groups such as ISIL or al-Qaeda “to get back on their feet”. 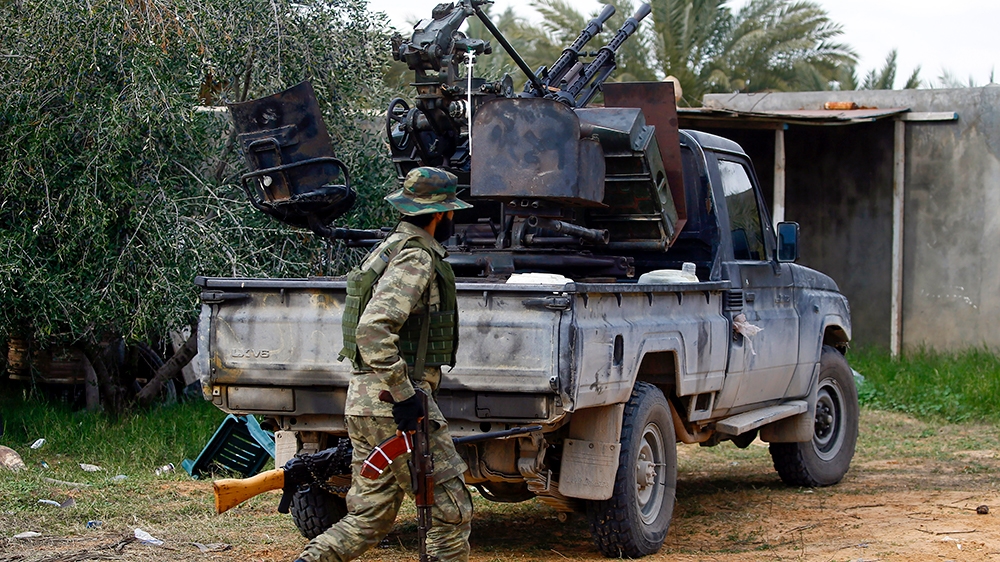 A fighter loyal to the UN-recognised Libyan GNA south of Tripoli on January 12 when a ceasefire was signed [File: Mahmud Turkia/AFP]

The UN hopes all parties will sign on to a plan to refrain from interference and commit to a truce that leads to a lasting end to hostilities, according to a draft of a final communique seen by AFP news agency.

The document also urges all parties to re-commit to a much-violated UN arms embargo and raises the prospect of political, inter-Libyan talks in Geneva at the end of the month.

The draft communique calls on all parties to recognise Libyan state oil firm NOC as the sole entity authorised to sell Libyan crude, and urges them to refrain from hostilities against oil production facilities, Reuters news agency reported.

“What the Berlin conference is trying to do is get an agreement between the states meddling in Libya to stop their support [of] the warring parties,” Wolfram Lacher, a political analyst, told Al Jazeera.

“The problem is Western states are not ready to put pressure on Haftar’s foreign supporters, particularly the UAE, so the promises that the foreign meddlers will make in Berlin ring hollow,” he said.

The International Crisis Group’s Libya expert Claudia Gazzini said the Berlin conference “could be a modest step forward” on the path to peace.

“Yet the risk remains that some participants will merely pay lip service to the diplomatic initiative, even as they continue to fuel a war from which they benefit.” 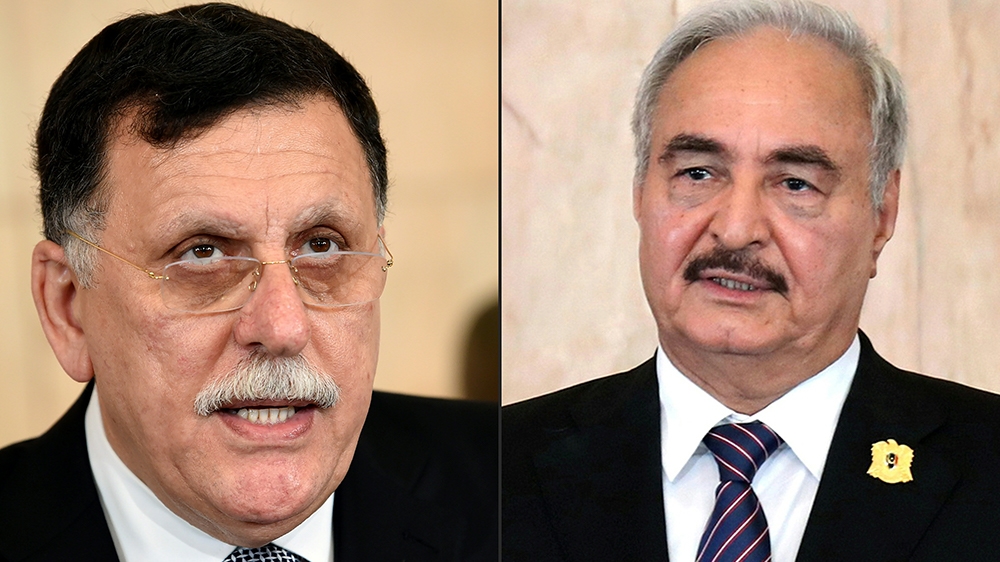