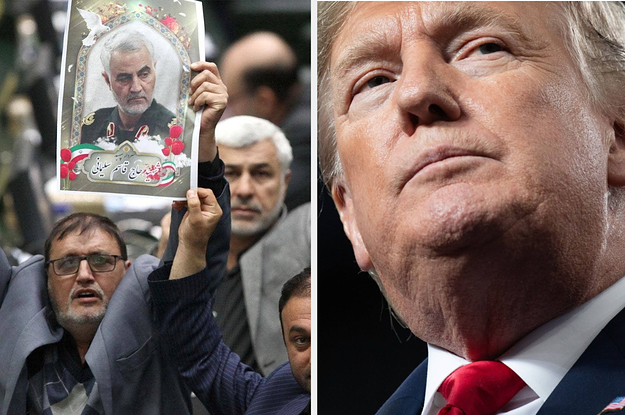 In the week following the killing of Iranian Gen. Qassem Soleimani, pro-Iranian disinformation has inundated Twitter, exaggerating the number of Americans injured by the Iranian counterattack on Jan. 8 and falsely claiming that US forces were retreating from Kuwait.

These fabrications are not intended to confuse an audience in the United States, or one around the globe — but rather an audience in Iran. Although the Iranian government has one of the world’s most active state-sponsored cybersecurity programs, the evidence is not yet clear who is behind the disinformation. But the goal, experts told BuzzFeed News, is to satisfy an unsettled Iranian public by making it believe its government responded harshly to the death of Soleimani, preventing the need for the country to escalate the conflict further.

“Iran is engaged in a conflict with the US, but it’s also engaged in an information struggle, and the primary audience is actually its own people.”

“If you tell your people, ‘Hey, we killed 80 Americans and wounded 200,’ it means you don’t need to do anything else, right?” David Patrikarakos, a fellow in the Institute of Iranian Studies at the University of St. Andrews and author of War in 140 Characters and Nuclear Iran, told BuzzFeed News. “Iran is engaged in a conflict with the US, but it’s also engaged in an information struggle, and the primary audience is actually its own people.”

On Twitter, online propagandists impersonated a reporter from the Israeli news outlet Haaretz to push false claims that the Iranian missile strike injured hundreds of US service members. They also pretended to be a New York Post reporter to share pro-Iranian propaganda. They hacked the Kuwait state news agency to share inaccurately that US military forces would withdraw from Kuwait. Twitter suspended the fake accounts.

Pro-Iranian rumor campaigns were flying prior to the missile strikes as well. On Monday, a US general was forced to deny false claims that he’d been killed, adding that Iran might be behind the social media accounts that claimed he died the day before in Kenya.

“Reports of my death are greatly exaggerated,” Gen. Stephen Townsend, the head of US Africa Command, said. “This is yet another example of the lies, propaganda and fake news coming from al-Shabaab and other malign actors such as Iran and its proxies.”

Aviv Ovadya, the founder of the Thoughtful Technology Project and a fellow at the Alliance for Securing Democracy, explained why pro-Iranian propagandists might attempt such a campaign: to avoid war. “Misinformation is also used to de-escalate conflicts,” he told BuzzFeed News, “by saying to a population that you have retaliated in a way that caused the aggressor serious harm.”

And Iran’s government had good reason to send that message to its people. Prior to the drone strikes that killed Soleimani, the deadliest demonstrations since Iran’s Islamic Revolution 40 years ago rocked the country. Between November and December 2019, Iranian security forces killed more than 180 people protesting against their government after a spike in gas prices. Soleimani’s death brought the country together, said Patrikarakos, a rally-around-the-flag effect that the Iranian government may be attempting to capitalize on.

“The conflict is real enough. But Iran is using it now for maximum domestic gain,” he said. “When people are out in the streets mourning Soleimani, they aren’t there protesting the regime. That’s a big win for them.”

Whatever the provenance, or intent, of the disinformation campaign, it does risk further destabilizing already jittery politicians in both nations.

“In this particular political moment that we’re in, I would worry about making sure people in policy-making positions are vetting their information and making sure it’s coming from trusted sources and not just random people on the internet,” Nina Jankowicz, a researcher at the Wilson Center think tank, told BuzzFeed News.

A Twitter spokesperson told BuzzFeed News on Friday that it had not yet seen evidence of state-backed activity. But the company’s investigations can take many months, sometimes building off clues provided by government agencies after the fact. When Twitter is confident that a disinformation campaign is backed by a state, it will publish data sets showing what it’s found, as it did last June with Iran and Russia. Twitter publishes the data in the hopes that exposing malicious behavior will deter similar actions in the future.

“We’re committed to protecting the integrity of information on Twitter during every peak in global conversations,” a Twitter spokesperson told BuzzFeed News. “We’ll continue to closely track any suspicious activity that could potentially manipulate the public conversation and take swift action if and when it does.”