Taipei, Taiwan – President Tsai Ing-wen has secured a second term in the office after winning the presidential election with 57.1 per cent of the votes on Saturday, final results showed.

Tsai had already declared victory in the election after Han conceded following a fiercely fought campaign.

Earlier, Tsai had assumed a strong lead over Kuomintang (KMT) rival Han, the populist mayor of Kaohsiung, an important industrial city, according to unoffficial television results.

A little more than a year ago, the prospect of Tsai’s re-election seemed unlikely after her Democratic Progressive Party (DPP) performed badly in the November 2018 mid-term election. The result forced Tsai to resign as party chair as the DPP lost control of a number of key cities and districts.

Tsai’s popularity, however, began to rise in mid-June, according to opinion polls, around the time that nearby Hong Kong began to descend into political chaos amid mass anti-government protests against Beijing’s perceived growing influence over the semi-autonomous Chinese city.

Officially known as the “Republic of China”, Taiwan’s political status is ambiguous and the island has previously been offered a similar “one country, two systems” arrangement to Hong Kong, a former British colony, from China‘s Communist Party. 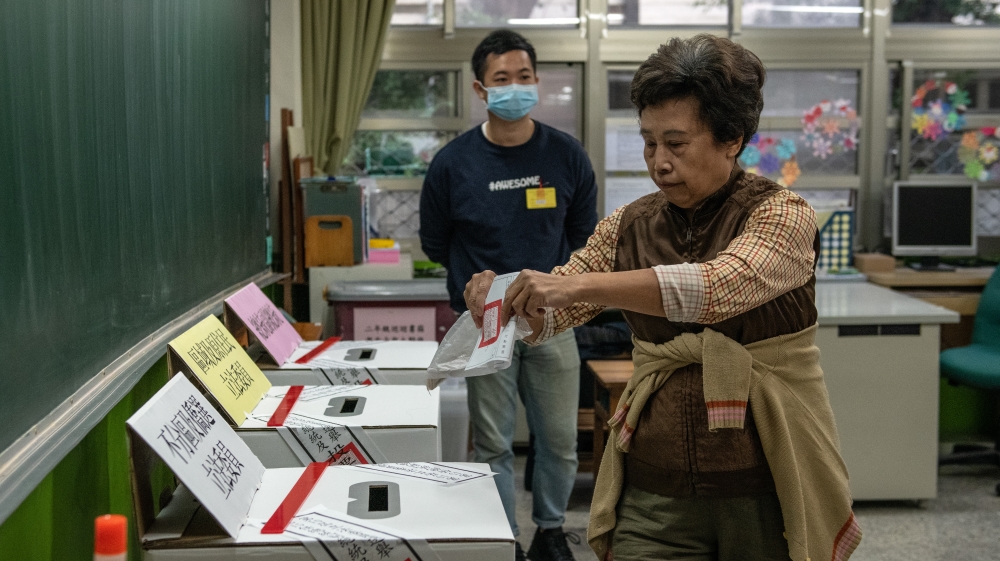 A woman casts her vote in the presidential election in Taipei, Taiwan [Carl Court/Getty Images]

Hong Kong, however, has shown many young Taiwanese that Beijing, courted by the KMT, is an untrustworthy partner.

Tsai also remains popular with young people for pushing a bill through parliament to legalise same-sex marriage, which came into effect in May 2019 in a landmark moment for Asia.

Ming Chung, 24, who voted around mid-morning with his 22-year-old sister at a polling station at Fuxing Elementary School in Taipei, said they had both chosen Tsai for a second time.

“I don’t want to become Hong Kong,” Ming said, adding that he and his sister both thought a vote for the KMT would bring Taiwan closer to China – something they did not wish to see happen.

“I hope young teenagers and young people can vote today,” Ming said, as many identify as “Taiwanese” rather than Chinese, a feeling shared by many people who were born after martial law ended in 1987 and lack strong ties to China.

Other voters, however, were less sure about their choice. Groly, a married mother in her 30s who asked to only be identified by her English nickname, said she had woken up feeling nervous on Saturday because she was still undecided but also worried about the future.

“I’m not sure who to vote for – if the [candidates] are really great,” she said. “Even if my husband asks me I will not tell him.”

But while Tsai has polled well with young people, Han and the KMT are favoured by older Taiwanese and those who are concerned about the economy. Wages in Taiwan have largely remained stagnant for some 20 years, and many Taiwanese would like the island to become closer with economic powerhouse China.

The election season has seen its fair share of fake news and misinformation campaigns on Facebook and LINE, according to the Taiwan FactCheck Center, leading the DPP-led parliament to controversially push through an anti-infiltration law on December 31.

China’s Communist Party claims sovereignty over Taiwan although it has never ruled the island, a one-time Japanese colony taken over by the Republic of China’s KMT-led government in 1945 amid the Chinese civil war. 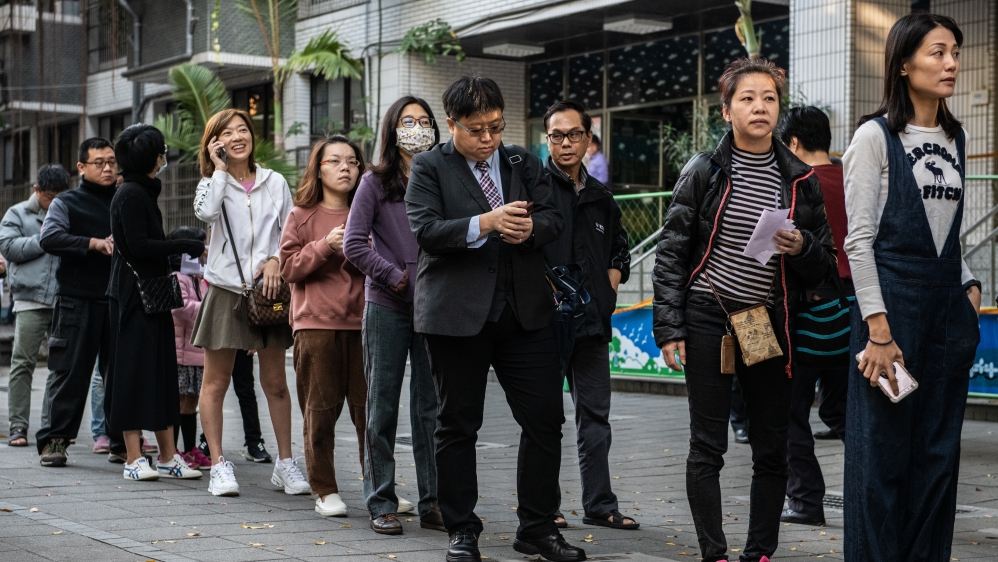 The fate of Taiwan led many of the nation’s 18.8 million eligible voters to travel great distances to vote on Saturday as Taiwanese can only vote near their official address – or hukou – often a family or parents’ home.

Travel, however, did not stop music teacher Anita Chen, whose parents drove her from Taipei to nearby Taoyuan city early on Saturday, from voting.

She did not have to travel as far as some friends who flew back from Japan and Australia to vote for Tsai or deeper into Taiwan’s rural provinces, like her boyfriend.

“I am very excited about this vote. It’s our right,” said the 30-year-old.

“I think the same-sex marriage [policy] is the main point why we decided to vote,” she also said of Taiwanese young people. “[Tsai] supports a lot of young people, especially in my field, the arts.”

Chen said while the economy may improve under Han, if he opened the door wider to China, it would also lead to more “Chinese influence” something she said she did not want for Taiwan.

Tsai was first voted into office in 2016 following on the heels of the Sunflower Movement two years earlier, when a trade deal between China and a KMT-led parliament unleashed a wave of protests that saw students take over Taiwan’s parliament and government headquarters.

Tsai is the first female leader of Taiwan and unique in Asia for running in her own right and not as the relative of a previous male leader, such as South Korea’s Park Geun-hye, Thailand’s Yingluck Shinawatra, Myanmar’s Aung San Suu Kyi and India’s Indira Gandhi.

Taiwanese have only directly voted for president since 1996 following the end of martial law nearly a decade before. While the KMT ruled the island under one-party rule for more for decades, the party has nevertheless remained popular in the post-democratic era.

Tsai is only the second DPP president to serve in office. Her DPP predecessor Chen Shui-bian served two terms in office although he later was found guilty of corruption following the end of his tenure.