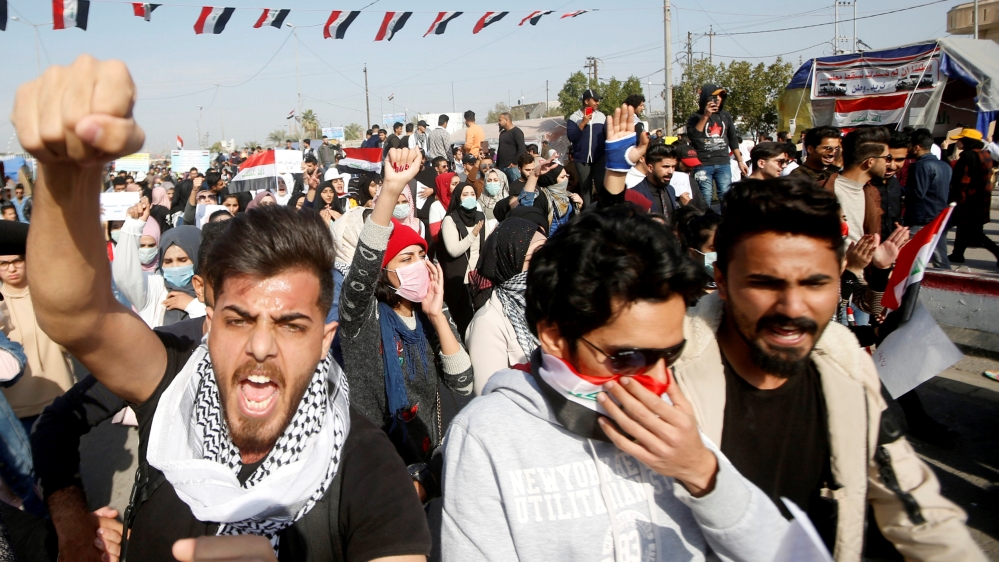 University students attend a protest against the US and Iran interventions, in Basra, Iraq on January 8, 2020 [Reuters/Essam al-Sudani]

It has been all too easy for the media coverage to ignore Iraq‘s ongoing protest movement. The assassination of General Qassem Soleimani, the head of the Quds Force of Iran’s Islamic Republican Guard Corps (IRCG), has placed Iraq at the centre of an international geopolitical crisis that could see the country turn into the front lines in a war it neither wants nor is able to prevent.

One of the early casualties of the recent escalation in US-Iranian tensions has been the protest movement. Events leading up to Soleimani’s assassination had already bumped the protesters off the news cycle and, more importantly, had given their opponents what they had been searching for in vain since October: a counter-cause to rally around and push back with.

Self-preservation and talk of foreign conspiracies failed to create a counter-narrative that could meaningfully blunt the power and appeal of the protests or take attention away from the political classes’ unpopularity and their appalling security response. All of this changed over the last two weeks beginning with the attack on the K-1 airbase in Kirkuk, which led to the death of one US contractor and the injuries of several US troops, the subsequent US air raids on pro-Iran militias and the breach of the United States‘s embassy compound that followed.

Indeed the demonstration that led to the attack on the embassy was the first instance of a successful counter-protest by Iran-leaning factions who had tried and failed to do so on a number of occasions since October.

Not only has the recent crisis enabled a shift in the narrative away from the protest movement, but the Iraqi political classes have now been presented with a more immediate set of issues that will likely see them prioritising the placation of Iran over the placation of the protesters. For example, the populist messaging of Shia cleric Muqtada al-Sadr, who leads one of the largest political blocs in parliament, has clearly shifted away from its previous focus on the protests and the need for reform towards anti-American sentiment following the assassination of Soleimani.

The incident is having an increasingly divisive effect on Iraqi political discourse. Long-standing tensions risk being exacerbated: between centre and periphery, between pro-Iranian and anti-Iranian, between the political elite and the forces of change, and within the political elite itself. Iraqi social media is increasingly littered with accusations of treason between anti-American and anti-Iranian voices.

Lost in the din is the unambiguous message that has consistently been heard in Tahrir Square and other protest sites: no to foreign interference of any kind. That Iran took the lion’s share of opprobrium in protest messaging is a reflection of the greater role that Iran has had in Iraq rather than of pro-American sentiment among the protesters.

However, today a binary of anti-Americanism and anti-Iranianism is being instrumentalised and imposed on the Iraqi public discourse in an attempt to prioritise Iran-US rivalries, rally pro-Iranian forces and outflank the protest movement.

The discussions that followed Soleimani’s assassination have often centred on the morality of the act and whether or not the Iranian general deserved to die. However, the questions of whether or not it was necessary and what strategic gains were made are far more important.

In itself, Soleimani’s death will neither change Iran’s regional policy nor will it weaken its network of hybrid forces. The most immediate consequence of the assassination thus far has been to strengthen Iran’s hand in Iraq. Combined with the seeming absence of strategic thinking on the issue in Washington, this may well prove to be an irreversible shift.

If this turns out to be the case, then a political response in Iraq would have been more effective than anything Iran could have militarily thrown at the US.

Iran’s Iraqi assets and allies have been mobilised. A parliamentary resolution (of doubtful legality) was issued demanding the withdrawal of US troops and there are now concerns regarding the emergence of an Iran-aligned, Shia-centric, majoritarian government in Baghdad. Trump’s threat to impose sanctions on Iraq hardly alleviates the anti-Americanism that is on display in Iraqi political circles. In other words, the very people who were so wrongfooted by the protest movement have been given a second wind by US policy.

It is disheartening to see an assassination so thoroughly overshadowing the protests particularly given the cost suffered by the protesters – hundreds dead and thousands injured since October. The bigger tragedy is that Iraqis are set to pay the price, yet again, for US and Iranian policies and the perpetual rivalry between the two.

However, it is too early to start writing the obituary of Iraq’s protest movement. Iraq is in the midst of a prolonged government formation process mired in constitutional and legal ambiguity following the resignation of Adil Abdul-Mahdi’s government in December. The momentum built by the protesters had effectively turned the street into a participant in those negotiations.

The current crisis has not fundamentally changed that fact and the protest movement is as adamant on the necessity of systemic change as ever before. They may have lost the limelight and political priority but the movement remains relevant to the government formation process and an important variable in Iraqi politics. This is as relevant to the Iraqi political classes as it is to Iran’s future plans in Iraq.

Bina’, one of the largest parliamentary coalitions and the one closest to Iran, have repeatedly had their nominees for the premiership blocked by public pressure. Though their base has been galvanised by recent events, it is unlikely that Bina’, or the political classes more generally, will find it easy to simply have their way today in the continued persistence of public pressure.

The reverberations of the assassination have imperilled the protest movement but they have not killed it. If war and/or sanctions can be avoided, public anger may yet again top the Iraqi political agenda when the dust from the current crisis settles.

The views expressed in this article are the author’s own and do not necessarily reflect Al Jazeera’s editorial stance.