Lome, Togo – It is a scenic walk along the driveway leading to the entrance of Lome’s new centre for the arts. The sun glints through the branches of centuries-old trees, lining a path set within thousands of square metres of lush parkland.

The incessant chirping of birds and the dull thud of my feet against the packed red earth are the only sounds to be heard within the vast compound. It is not long before the canopy of boughs and path give way to a large gravel clearing. A grand, white, two-storey vision rises from the ground, gleaming against the blue sky.

Set on an elevated foundation, a wide stone staircase leads up into the whitewashed arcades of Palais De Lome in Togo’s capital. At its heart is a courtyard garden – an oasis of smooth white cement walls, decorative wood columns and splashes of green trees and ferns.

Past the crisp white walls and pivoting glass doors are the exhibition spaces – a blank canvas for African art by painters such as Emmanuel Sogbadji and Edwige Aplogan and sculptures by Sokey Edorh. A vaulted, wood-ceilinged corridor on the first floor leads to a room filled with a panoply of artefacts sourced from the region. There are intricately woven ceremonial gowns and beaded headdresses worn by chieftains and West African kings. 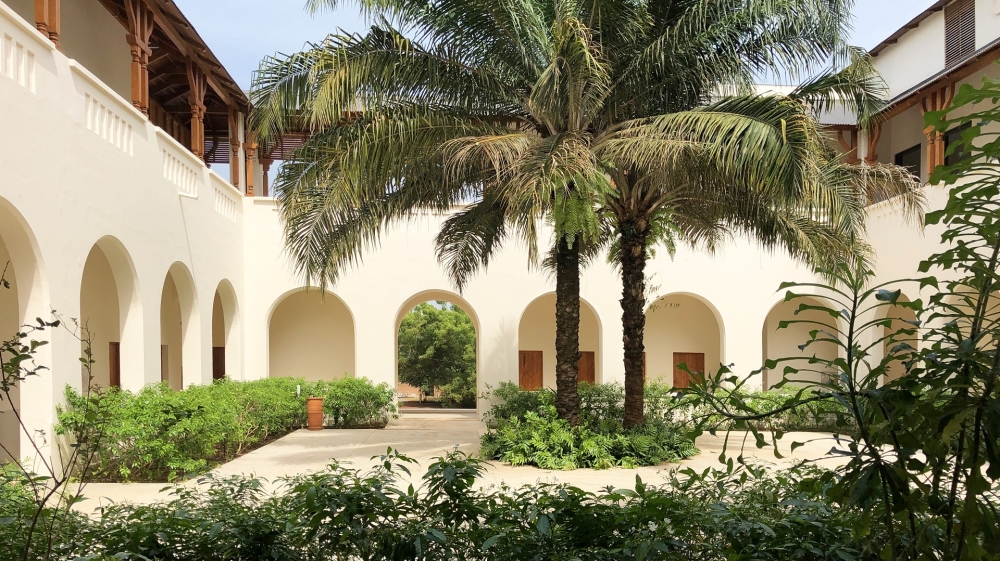 The centre’s remit is not limited to the promotion of pan-African art and culture, according to its Togolese director, Sonia Lawson. Spread across some 2,400sq metres (26,000 square feet) of land, Palais De Lome will showcase the country’s natural resources. The site’s varied landscape includes a garden of sea plants from the coastal city’s sandy shores, grass savannah with vegetation as diverse as palms, cacti and flowering plants, and forests populated by trees and vines. Lawson says the institute expects to attract between 100,000 and 130,000 visitors each year.

It is hoped that the $3.6m transformation of the former colonial building into a centre for the arts and culture will help boost tourism and aid the recovery of the small West African nation’s struggling economy.

“It was important and necessary to have such a public institution in Togo because we lacked that kind of infrastructure,” Lawson explains. “We want to be a cultural hub and attract talent from the rest of Africa. We believe culture is important in the development of a country.”

Investment in infrastructure has positioned Togo’s capital as an aviation hub in West Africa. Along with the country’s strategic geographic location on the coast of the Gulf of Guinea, it is expected to support Togo’s bid to plug into the sub-region’s vibrant culture ecosystem.

The past exists. You don’t need to destroy a building. For me, it was a kind of irony to use a colonial building to showcase the future of Africa. It means that we have appropriated this building and it’s now ours.

The renovation of the Palais De Lome is part of a wider government programme to restore sites of historical importance. However, questions have been asked about why the government would spend millions of dollars renovating a remnant of Togo’s colonial past – a symbol of oppression – rather than constructing a new space.

Lawson has an answer. “I think it’s important to be able to face the past,” she says resolutely. “The past exists. You don’t need to destroy a building. For me, it was a kind of irony to use a colonial building to showcase the future of Africa. It means that we have appropriated this building and it’s now ours.”

Lawson refers to an image she discovered of a uniformed man proudly staring out of a picture beyond the expanse of time. It was a photograph of Governor August Kohler – the man placed in charge of the West African territory then known as Togoland, which incorporated what is now Togo and part of Ghana, more than a century ago. Between 1884 and 1914, Togoland was a protectorate of the German Empire. A lucrative resource for its German rulers, the prestigious protectorate was considered a ‘model colony’. In the 1890s, Kohler started building the original incarnation of Palais De Lome – the Governor’s Palace – as a display of Germany’s power and majesty. 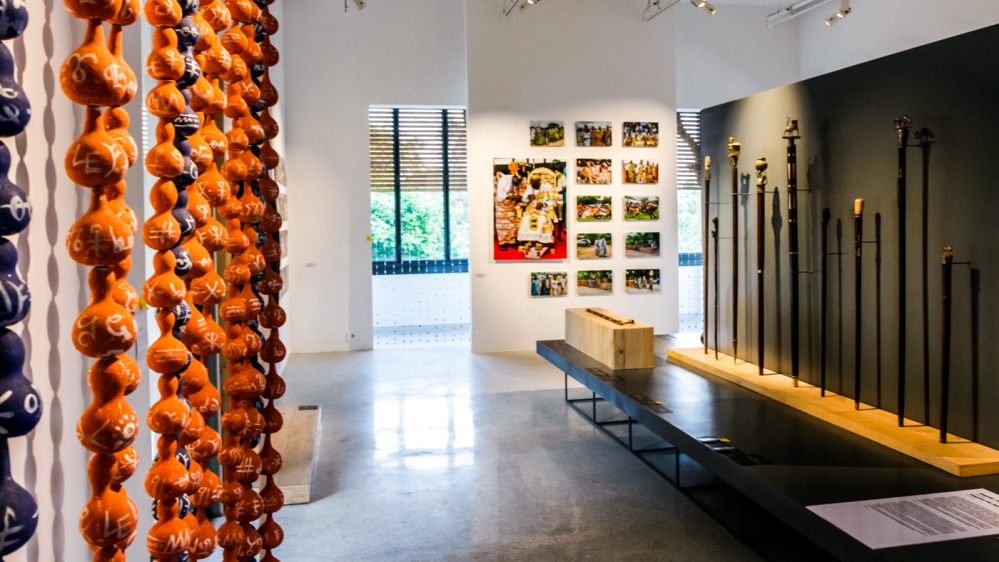 Togo of the Kings, an exhibition presenting artefacts belonging to the various kingdoms, chieftaincies and communities of Togo [Photo courtesy of Nicolas Robert]

The Governor’s Palace was a picture of colonial decadence. Its construction was an opportunity for the imperial rulers to demonstrate their architectural ingenuity by combining local and imported materials with German technology. The building’s large patio was modelled on the palace of Benin’s King Toffa in Porto-Novo – a nod to the traditional architectural design of the sub-region. It housed the governor’s private residence on the first floor with administrative offices located below.

During German rule, two towers crowned the imposing structure, one holding the imperial flag facing the ocean, the second overlooking the ‘hinterland’. The main entrance was decorated with elephant tusks two metres long (6.5 feet) – completing the desired image of wealth and extravagance.

Germany lost its prized colony in 1914 when Togoland was invaded and occupied by British and French forces following the outbreak of the first world war. The territory was later divided into separate British and French administrative zones and the Governor’s Palace was taken over by French colonialists. It was considerably expanded during its time as the governors’ residences during French rule.

A new chapter for the palace

When Togo gained independence in 1960, it was the beginning of a new chapter for the palace. It became the seat of government for the Togolese Republic until the mid-1970s when it was used to house state guests. Months after a reformist prime minister moved into the property in 1991, the palace was raided by Togo’s armed forces. This marked the beginning of a period of social and political unrest, which saw the building dramatically deteriorate. Tropical vegetation had overwhelmed the governor’s palace when French restoration architect Laurent Volay visited the abandoned site in 2012.

“It was like a jungle,” Volay says. “There was a lot of vegetation and in the centre of it there was the monument and it was something extraordinary.” 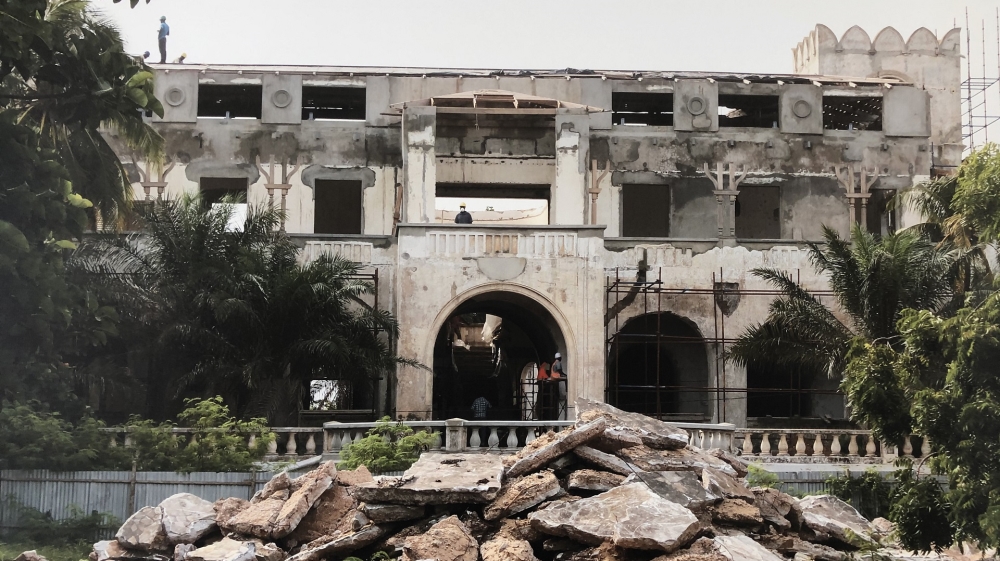 The palace before its renovation [Photo courtesy of Segond-Guyon Archipat]

Careful examination of the property revealed layers of poorly executed adaptations to the building. It took a further five years to complete construction, with the architects drawing heavily on the archives. The team stripped away the building’s flawed layers – removing buildings added in the 1970s, reopening the terraces and restoring wooden galleries that had been destroyed.

The project was fraught with challenges during its first year, Volay explains. He cites difficulties sourcing sustainable materials locally, which slowed progress. The team eventually found a steady supply of teak and iroko woods in the region, which the carpenters used for the centre’s doors and throughout the first-floor galleries.

An architectural highlight for Volay was the faithful restoration of the original imperial cement staircase, complete with wrought iron balustrade. A further triumph is found within a ground floor space Volay describes as “a room for special things”. Salvaged tiles are arranged to resemble decorative rugs in a bid to reuse “precious materials”.

‘An oasis in a cultural desert’ 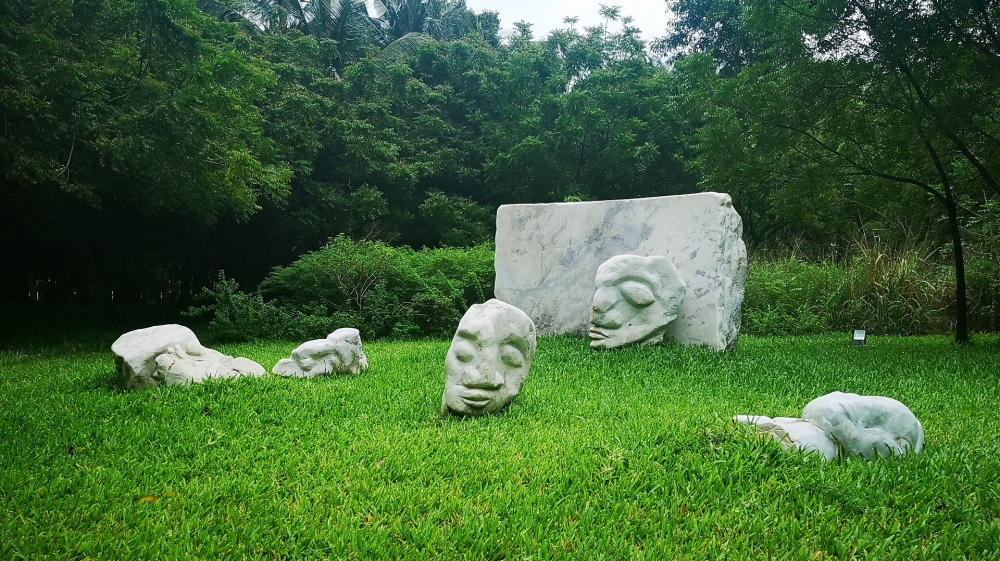 On the day of its launch in November, hundreds of guests arrive to celebrate the grand opening of Palais De Lome. Amidst the revelry, some raised concerns about how the centre will raise sufficient funds for its upkeep and succeed in fulfilling its remit to support the arts in Togo and the region. Despite this, many people see the centre as an important cultural legacy for the nation.

“It’s an oasis in the cultural desert,” says Togolese sculptor Sadikou Oukpedjo, who was commissioned to create a large-scale marble sculpture that lies on a grassy clearing within the park. His sentiment is felt by many artists in a country where state investment in culture has been lacking.

Dakar-based artist and physicist Caroline Gueye and Togolese painter Seshie Kossi say the Palais is an important cultural platform for Africans that can vastly improve opportunities for artists. “It’s just inspiring to be here,” Gueye says. “To create for this place – that would be fantastic. We would all like to showcase our work here.” 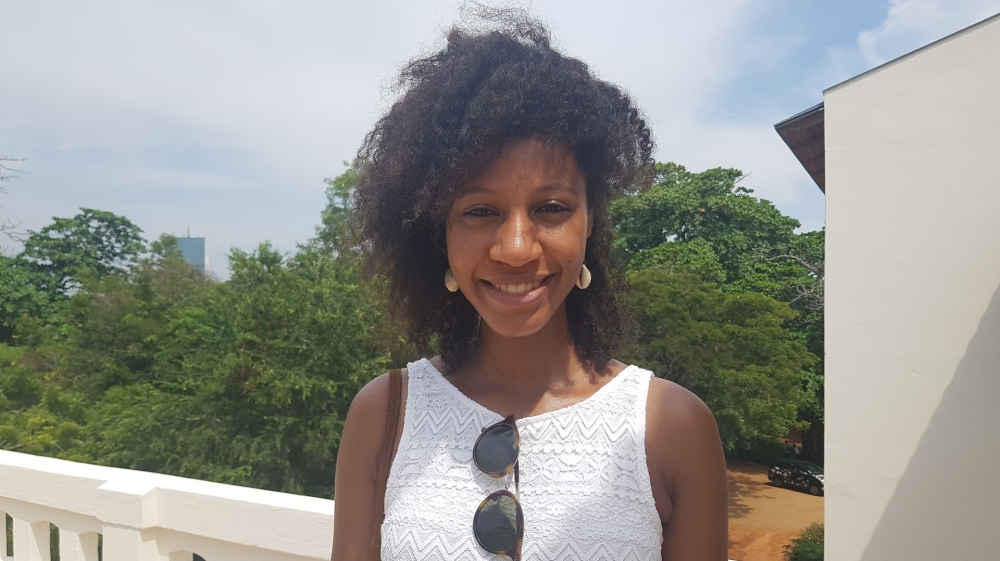 Caroline Gueye, an artist and physicist based in Dakar [Ijeoma Ndukwe/Al Jazeera]

A photography exhibition at the Palais documents its extraordinary journey, showing the property’s striking transformation from a ruin following two decades of abandonment, into a modern pan-African cultural institute.

From the first floor, a wood-pillared balcony beautifully frames an expanse of water scattered with vibrant green water lilies. A thick stretch of trees bordering the pond is punctuated by a group of tall bronze sculptures. Beyond the iron gates of the entrance, a strip of yellow sand meets the ocean before a greyish blue haze blurs the Atlantic and sky on the horizon.

Although the vestiges of the building’s colonial past remain within its walls, the spirited optimism for its future in the hands of Togo’s people prevails. It is impossible to determine whether this will be the building’s last incarnation, but the launch of Palais De Lome feels like the beginning of an era.