(Want to get this briefing by email? Here’s the sign-up.)

We’re covering the growing hostilities between the U.S. and Iran, the Golden Globes, and the start of Harvey Weinstein’s criminal trial. 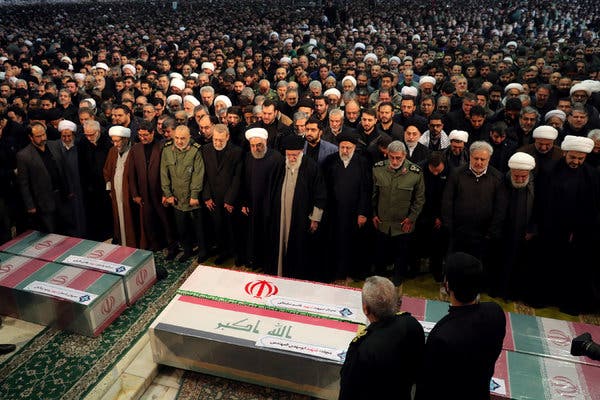 Iran’s supreme leader, Ayatollah Ali Khamenei, center, led a prayer in Tehran today during a funeral for Maj. Gen. Qassim Suleimani and others killed with him.Credit…Office of Iranian Supreme Leader, via Reuters

Two days after the U.S. killed Maj. Gen. Qassim Suleimani in Baghdad, consequences rippled across the Middle East on Sunday. Among them:

President Trump, warning Iran not to attack, said that the U.S. had identified 52 targets in the country, including cultural sites. He also threatened Iraq with “very big sanctions” if it forced American troops to leave.

The situation is “as volatile as it has been at any point in many years, one that will challenge an instinctive, combative and relatively inexperienced commander in chief,” our chief White House correspondent, Peter Baker, writes.

Related: Dozens of Iranians and Iranian-Americans were held for hours at the U.S. border with Canada over the weekend as America increased security.

Another angle: As Congress reconvenes today after the holidays, the escalating Middle East hostilities have added a volatile element to the fight over Mr. Trump’s impeachment trial in the Senate.

Perspective: In an opinion piece for The Times, Susan Rice, the U.S. national security adviser from 2013 to 2017, writes that while full-scale conflict with Iran is not inevitable, “the probability is higher than at any point in decades.”

The Daily: Today’s episode is about the killing of General Suleimani.

Boeing’s risks may go beyond software

As the airplane manufacturer works to get the 737 Max back into the air, new potential design flaws have been uncovered.

Among the most pressing issues were previously unreported concerns with the wiring that helps control the tail of the plane, according to a senior engineer at Boeing and three people familiar with the matter.

Two deadly crashes were caused in part by new software on the Max, Boeing’s most important model. A fix for the software has been developed but has not yet been approved, extending a crisis that has disrupted global aviation.

What’s next: Regulators have suggested that the Max could be approved to fly again by the spring, even if the wiring issue needs to be fixed.

Old Hollywood holds off the new

At the Golden Globe Awards on Sunday, the traditional studios struck a blow against the streaming giants, with Netflix taking home only two prizes despite leading the night with 34 nominations.

The awards, given out by the Hollywood Foreign Press Association, come before the Academy Awards, whose nominations will be announced next week. The Globes and the Oscars have agreed on best picture winners only 50 percent of the time over the past decade.

Closer look: “The microclimate in the room for the night was breezy with patches of sincerity,” our chief TV critic writes. The ceremony also featured some advice from Tom Hanks: Don’t be late.

The details: Here’s the full list of winners and a look at the fashion on the red carpet.

If you have 7 minutes, this is worth it

The Canadian government once pressured Inuit women to travel far south to give birth in hospitals, an experience that many found isolating. Inuit midwives are now reclaiming women’s choice to give birth in their hometown.

The midwives, trained by a nearby hospital, can speak the women’s first language and know their culture. The move is part of Canada’s efforts to make amends for its brutal history of relations with its Indigenous population.

Here’s what else is happening

Harvey Weinstein in court: The Hollywood producer’s criminal trial, which begins today, involves a narrow legal case with a fraught back story and a highly unpredictable result.

Departure in Afghanistan: John Bass, the U.S. ambassador in Kabul, is leaving his post immediately, the State Department announced today. The departure comes as the U.S. tries to negotiate a tentative peace agreement with the Taliban.

Tighter grip in Venezuela: President Nicolás Maduro took control of the country’s last independent institution, the National Assembly, and sidelined Juan Guaidó, the lawmaker who has staked a rival claim to the presidency.

Frustration in Australia: Prime Minister Scott Morrison has faced bitter criticism over what many see as an ineffectual response to the country’s wildfires and his dismissal of climate change as an exacerbating factor.

Rethinking fossil fuel ties: For years, local chapters of the N.A.A.C.P. have advanced the interests of energy companies that are big donors to their programs. The national office is now pushing back.

Snapshot: Above, a march across the Brooklyn Bridge on Sunday, when tens of thousands poured into Lower Manhattan in a show of solidarity for New York’s Jews after a recent spate of anti-Semitic attacks.

Who is this?: We recently asked readers to identify up to 52 politicians, athletes and celebrities. Here’s how you did.

N.F.L. playoffs: In Sunday’s games, Minnesota beat New Orleans in overtime, and Seattle held off Philadelphia. Here’s what we learned in the wild-card round.

52 Places traveler: Looking back on a whirlwind journey around the world, our columnist revisits the experiences that offered lessons for travel — and life.

Metropolitan Diary: In this week’s column, a dinner on a crisp fall night, a sandwich to go, and more reader tales of New York City.

What we’re listening to: Terry Gross’s 2016 “Fresh Air” interview with the author Viet Thanh Nguyen, who is a contributing opinion writer for The Times. Kevin McKenna, a deputy business editor, says, “I read his recent essay, in which he wrote that being able to show affection for his children is a luxury his refugee parents never had, and went back to this interview for more of his remarkable life story.”

Now, a break from the news

The centuries-old system works pretty well, but it requires that every fourth year be a leap year, and 2020 is one. We’ll get an extra day, Feb. 29, to bring the calendar back in line with the time it takes Earth to go around the sun: slightly more than 365 days.

To keep the calendar in balance, every century we skip leap year, and every fourth century we don’t. (The next skip will be 2100.)

Another marker: Earth’s elliptical orbit means that there’s a point when the planet is farthest from the sun, and another when it is closest.

That closest pass, known as perihelion, happened over the weekend. The farthest point will come in early July.

Looking for something sooner and more obvious to celebrate? Our next solar marker is an equinox. “Day” and “night” will be evenly split on March 19 or 20 (depending on your time zone).

That’s it for this briefing. See you next time.

Thank you
Mark Josephson and Eleanor Stanford provided the break from the news. Andrea Kannapell, the briefings editor, wrote today’s Back Story. You can reach the team at briefing@nytimes.com.

P.S.
• We’re listening to “The Daily.” Today’s episode is about why Maj. Gen. Qassim Suleimani was a U.S. target.
• Here’s today’s Mini Crossword, and a clue: Pewter or steel (five letters). You can find all our puzzles here.
• The Times’s Science desk can help you sync your calendar with the solar system.