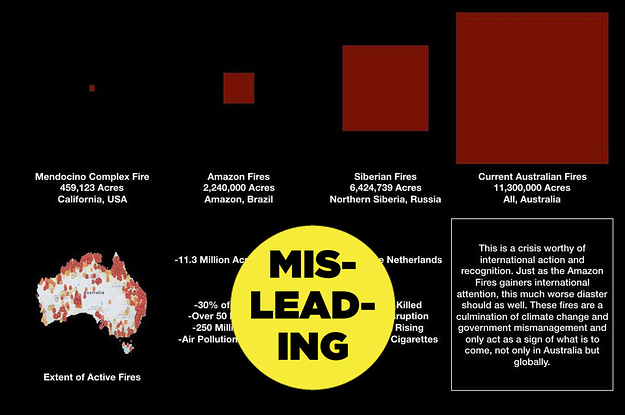 Australia has been in the grip of a deadly bushfire season since September 2019. As of Jan. 6, 2020, the fires have claimed 24 lives; an estimated half a billion native animals have perished; and more than 1,700 homes have been razed.

Many Australians are finding out information about the bushfires through social media networks, but some accounts are spreading information that is false, misleading or unverified.

1. Claims that various groups — including environmentalists and Muslims — have conspired to start bushfires are baseless.

Posts on Twitter and Facebook have baselessly accused environmentalists of deliberately lighting bushfires to promote awareness about climate change. (In some cases, these posters have linked to real news stories that do not support their account.)

There is no evidence to suggest any organised group has worked to deliberately start bushfires across Australia.

There is evidence that some fires have been started by arson, while others have been sparked by lightning strikes. The spread and severity of the bushfires has been exacerbated by extreme weather conditions including Australia’s ongoing drought and its hottest year on record in 2019.

2. The theory that Australia’s bushfires were deliberately lit to clear the way for a high-speed rail network is unfounded.

Posts alleging Australia’s bushfires are an effort to clear a corridor for a high-speed rail track have been circulating Facebook and Twitter since November 2019. A similar theory was floated about the California bushfires in 2018.

This is not based on any evidence and is untrue.

A 2013 AP image of a Tasmanian family clinging to a jetty to escape fires has been circulated as having been taken during the recent fires.

An image of a petrol station circulating on Twitter in early January was widely assumed to be from the Australian fires, but it was posted on Dec. 1, 2019 by Instagram user @george_natsioulis, who said it was taken in Greece.

A Change.org petition claiming that a firefighter who was filmed saying “tell the prime minister to go and get fucked from Nelligen” was “facing dismissal” from the NSW Rural Fire Service (RFS) has received more than 47,000 signatures.

But the RFS told BuzzFeed News the man is not facing disciplinary action. He has, however, been asked to temporarily step down from duties due to exhaustion.

5. This graphic misrepresented the state of the blazes.

Redditor u/Fierylizard03 posted an image to r/Australia comparing the the scale of Australia’s bushfires to the 2019 Amazon fires, which was subsequently shared to Facebook and Twitter.

The comparison graphics are not to scale and the “extent of active fires” map is not current.

6. This is a 3D visualisation of where fires have burned based on NASA data spanning a month, and not a satellite photo.

This 3D visualisation of the bushfires was described in posts on Reddit and Twitter as a satellite image, or a photo taken from the International Space Station.

The image’s creator Anthony Hearsey wrote on Facebook that the image is a representation “made from data from NASA’s FIRMS (Satellite data regarding fires) between 05/12/19 – 05/01/20”.

Hearsey said it is a compilation of all the areas that had burnt, and not a current representation.

Have you seen false or misleading information about the bushfires circulating online? Email cameron.wilson@buzzfeed.com.