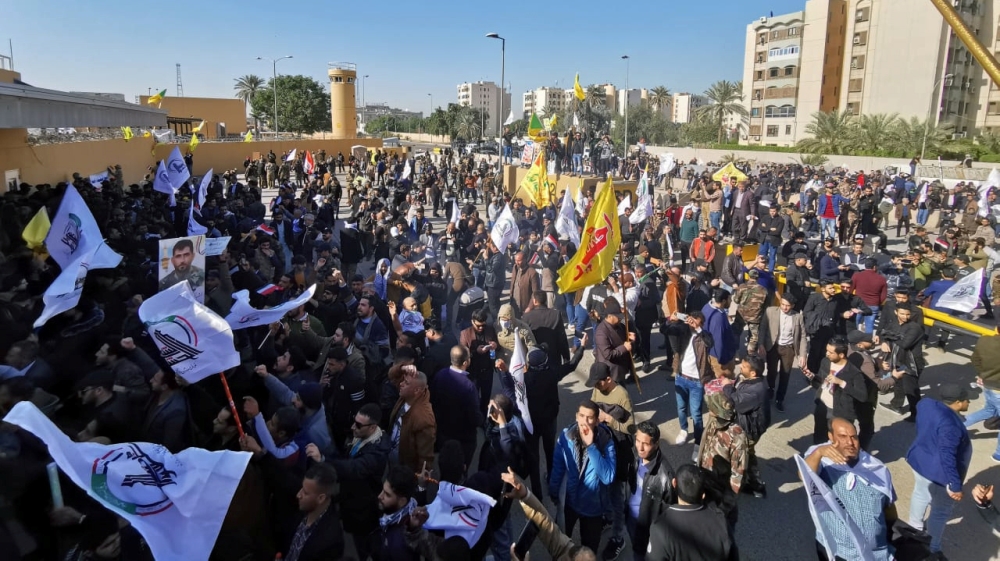 Protesters gather to condemn air attacks on bases belonging to the Hashd al-Shaabi paramilitary force, or Popular Mobilization Forces (PMF), outside the main gate of the US embassy in Baghdad [Thaier al-Sudani/Reuters]

United States President Donald Trump says he holds Tehran “fully responsible” for protesters storming the US embassy compound in Baghdad days after the US attacked an Iran-backed group in Iraq and Syria.

“Iran killed an American contractor, wounding many. We strongly responded, and always will. Now Iran is orchestrating an attack on the US embassy in Iraq. They will be held fully responsible,” he wrote on Twitter on Tuesday.

“In addition, we expect Iraq to use its forces to protect the Embassy, and so notified!”

On Sunday, the US launched air attacks on sites in Iraq and Syria belonging to Kataib Hezbollah, an Iran-backed militia, that Washington said was in retaliation for the killing of a US contractor on an Iraqi military base.

At least 25 fighters from Kataib Hezbollah were killed in the attack.

Protesters stormed the US embassy compound earlier on Tuesday, after smashing a main door and setting fire to a reception area, prompting tear gas and sounds of gunfire.

Shouting “Down, Down USA!” the crowd hurled water bottles and smashed security cameras outside the embassy grounds.

The protesters raised flags of the powerful paramilitary group Hashd al-Shaabi (Popular Mobilization Forces), with which Kataib Hezbollah is associated.

The US ambassador to Iraq and other staff were evacuated from the embassy.

The developments represent a major downturn in Iraq-US relations that could further undermine US influence in the region and weaken Washington’s hand in its pressure campaign against Iran.

Iraq has long struggled to balance its ties with the US and Iran, both allies of the Iraqi government.

But the government’s angry reaction to the US air attacks signalled a deterioration of US-Iraq relations.

Iraqi security forces made no effort to stop the protesters as they marched to the heavily-fortified Green Zone after a funeral held for those killed in the US air attacks, letting them pass through a security checkpoint leading to the area.

Seven armoured vehicles with about 30 Iraqi soldiers arrived near the embassy hours after the violence erupted, deploying near the embassy walls but not close to the breached area. Four vehicles carrying riot police approached the embassy later but were forced back by the protesters who blocked their path.

There was no immediate comment from the US Pentagon or US State Department on the breach of the US embassy in Baghdad.