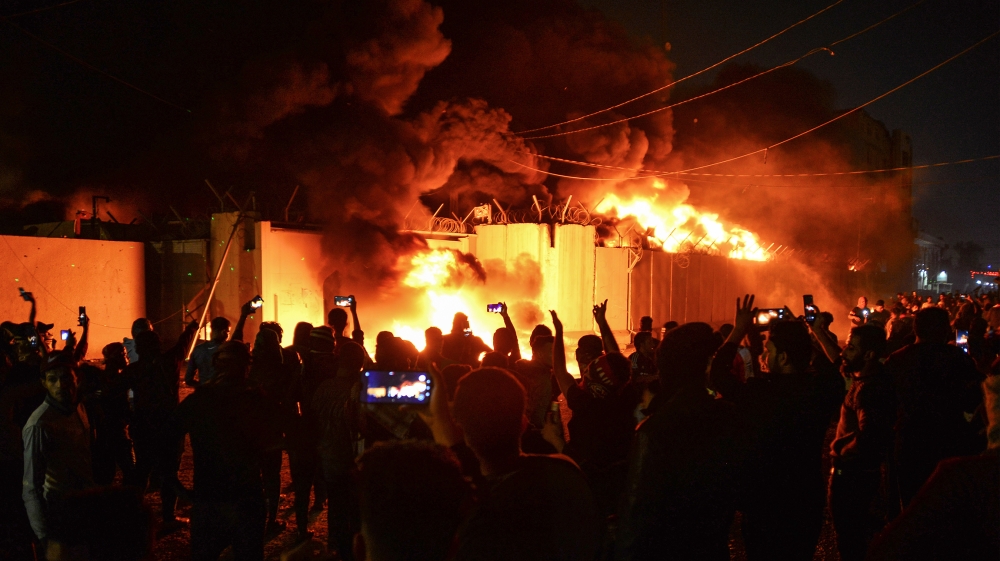 Anti-government protesters stormed and set the Iranian consulate ablaze in the southern city of Najaf on Wednesday as turmoil in Iraq continues to escalate.

It was the strongest expression yet of the anti-Iranian sentiment by Iraqi demonstrators, who have taken to the streets for weeks in the capital Baghdad and Shia-Muslim-majority south – and have been shot in their hundreds by Iraqi security forces.

Staff at the Iranian consulate evacuated safely before the attack in the holy city.

Al Jazeera’s Mohammed Jamjoom, reporting from the capital Baghdad said: “What we’re being told by eyewitnesses is that protesters surrounded the Iranian consulate in Najaf and they then set fire either to the building itself or the fence that surrounds the building.”

“But we’re still awaiting more details about it, specifically.”

One protester was killed and at least 35 people were wounded when police fired live ammunition to prevent them from entering the building, a police official told The Associated Press.

The incident marked an escalation in the demonstrations that have raged in Baghdad and across mostly Shia southern Iraq since October 1.

The protesters accuse the government of being hopelessly corrupt and complain of poor public services and high unemployment.

Security forces have fired live rounds, tear gas, and smoke bombs on a near-daily basis since the unrest began.

At least 350 people have been killed and thousands wounded in what has become the largest grassroots protest movement in Iraq’s modern history.

Jamjoom said the latest incident is “clearly a significant escalation in Najaf, that is the seat of the country of the Shia religious authority”.

“This really adds fuel to the crisis at a time when the protesters are continuing to come out.”

The burning of the Iranian consulate followed tense days in southern Iraq, where protesters have burned tyres and cut access to main roads in several provinces.

In Karbala, four protesters were killed by live fire from security forces in the previous 24 hours.

Three of the anti-government protesters were killed when security forces fired live rounds to disperse crowds in the holy city of Karbala late Tuesday, security and medical officials said.

One protester died of wounds suffered when a tear gas canister struck him in clashes earlier in the day.

Authorities have warned against exploitation of the unrest by armed groups. The Islamic State of Iraq and the Levant (ISIL or ISIS) group claimed three bomb blasts in Baghdad overnight that killed at least six people, although it provided no evidence for the claim.

Beleaguered Prime Minister Adel Abdul Mahdi expressed concern over both the violence and the financial toll of unrest late on Tuesday.

“There have been martyrs among protesters and security forces, many wounded and arrested … We’re trying to identify mistakes” made by security forces in trying to put down the protests, he told a televised cabinet meeting.